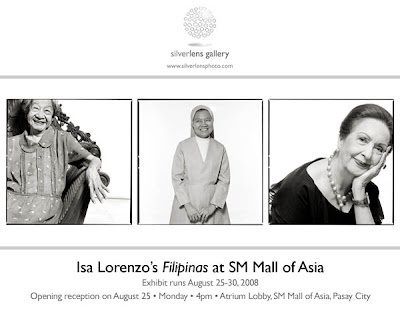 FILIPINAS: Photographs by Isa Lorenzo will be exhibited at the Atrium Lobby of the SM Mall of Asia, Pasay City from 25 to 30 August, 2008. An opening reception will be held at 4pm on August 25, Monday.

The photo exhibition FILIPINAS is comprised of thirty (30) black and white portraits of distinguished Filipino women who have achieved national and international recognition in various fields.

FILIPINAS was conceptualized by Isa Lorenzo, fine art photographer with a Master’s degree in media and photography from the New School University-Parsons School of Design in New York City. Deanna Ongpin-Recto, formerly First Secretary and Senior Foreign Affairs Adviser at the Philippine Permanent Delegation to UNESCO, is the curator of the exhibition.

First shown in 2004 at the Cultural Center of the Philippines, FILIPINAS has since been made into a book, which is available at Powerbooks, Fully Booked, Booktrends, Popular Bookstore, Rustans and Travel Cafe.

dissertation thesis said…
I have been visiting various blogs for my dissertation research. I have found your blog to be quite useful. Keep updating your blog with valuable information... Regards
August 26, 2010 at 8:51 PM 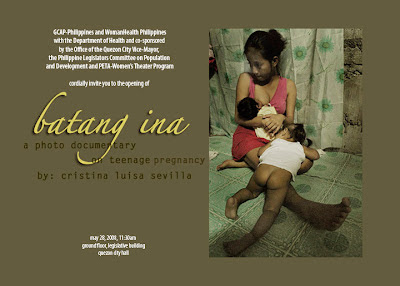